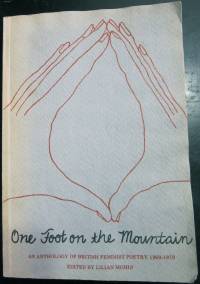 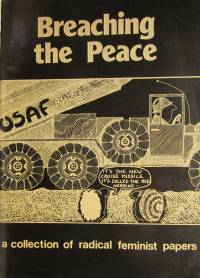 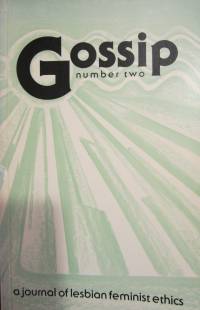 Onlywomen Press started out in the early 1970s as a radical lesbian feminist publisher and printer. Initially they were called The Womens Press, until the name was taken by the much larger book publishers. Lilian Mohin and Sheila Shulman were among the key Onlywomen figures. They set up their own printing operation in 1978, first in Hackney, then moving to Mount Pleasant. One Foot on the Mountain, an anthology of British Feminist Poetry 1969-79 (edited by Lilian Mohin) was one of their early well known publications. Book printing which they had hoped to do wasn't possible, finances and technical development stood in their way, although they printed (and published) many pamphlets, such as the 1983 classic critique of women's involvement in the peace movement, Breaching the Peace along with various leaflets and posters for womens liberation groups and others. They got the rights to reprint and publish various works of the north american lesbian writer Adrienne Rich, including Women and Honor: Notes on lying (c.1979) and Compulsory heterosexuality and lesbian existence(1981). They also published and printed the much debated pamphlet Hard words: and why lesbians have to say them by Caroline Halliday [1980] The printing side ended in 1984. Onlywomen continued to publish and distribute lesbian fiction, poetry and critical writings including Gossip: A journal of lesbian ethics which ran for about 6 issues 1986-7. They still publish if not actually print feminist material. The following text is a discussion among the members that was published in the UK radical feminist magazine Trouble and Strife in 1981 and seems to give a good insight. This was also reprinted in Feminist Literary Theory: A Reader (Eagleton 1993/2004)

A Press of One’s Own (Cath Jackson)

We were convinced that if we were to be heard, if out words to be published, we would have to control the process of publishing. And that for us at that time, meant learning to print. We felt strongly – and with some justification — that on the production floor our words would be changed: not just not made ours but also discarded — simply got rid of. They could be — and were — just thrown away. We had to control the process to get our words out there.

So the three of us enrolled at Camberwell College of Art to learn printing. We knew a woman who had already done an evening class there, which was how we knew they ran a printing course. But we were the first full-time women on the course.

SS: To me it was a necessary, physical material extension of our feminism. It was clear that lesbian feminist writing wasn’t getting published. It seemed to us a necessary consequence of being writers. Somewhere too at the back of my head was also Trotsky: the notion that we would be physically making a revolution. In retrospect it was a slightly naïve decision because technology was already outstripping us.

LM: We started college in 1974. All the instructors were male and the other students were young male school leavers — but we hardly had anything to do with them. The tutors took a while to cope, but once they decided that we were serious about learning to print they became immensely helpful. Although they would call us all ”the girls” and they refused to tell us apart, even though Deborah is tall and Sheila and I are very short. We had to buy a set of steps which we shared in order to reach the machines.

It was a two year course, learning print planning and production and the philosophy behind printing. We learned the jargon and the whole process from manufacturing the lead type to setting and printing in lead, offset-litho printing and the whole range of modern printing techniques. Doing the course changed the way we thought about the books we wanted to produce. We became considerably less pompous about our publishing priorities than we might otherwise have been, It taught us about material reality, the mechanics of the real world.

SS: Learning to print made me think much more carefully about how things get done: the difference between thinking something and actually doing it. Before I joined the group I thought the world was made of words (…).

LM: While we were on the course we carried on meeting every week. We used the college equipment to produce several pamphlets of poems as part of our course work, under what was our name at the time: the Women’s Press. We did Judith Kazantzis’ ‘Finding Food’, work done by Astra, ‘Deviation’ by Judith Barrington, ‘It’ll Take a Long Time’ by Janet Gooch and some of my own poems ‘Cracks’. We also taught other women about the production process. It was part of the politics of the press. Later when we got the print business going, we taught women how to print.

JB: I remember sitting in meetings talking politics and binding by hand — literally sewing together — copies of the Astra poetry pamphlet. This was partly because we could not afford to pay to get it bound but more because we wanted to do every part of the process, to make the book ourselves. A few hundred copies could be accommodated by pressing lovers and friends into labour – but they wouldn’t do it twice.

LM: We did have some problems at Camberwell. One of the technicians melted down the lead type that I’d set for the Judith Kazantzis pamphlet, ‘Finding Food’. It was his job to proof-read the work that the students had set in type and he took particular exception to one of Judith’s poems, a short humorous poem about her husband. He said it was ‘against nature’.

We would also take work outside and use the equipment of various sympathetic lefty presses. We printed and published the first ever women’s liberation calendar that way and sold it at conferences. It had photographs of various women’s liberation movement events taken by feminist photographers. We felt ourselves to be — and were — very much part of the movement and absolutely convinced that we were in it together, whatever the political divisions.

SS: We made the plates at a community press in Thornton Heath. The plate-maker, camera and press were all plugged into one multi-socket, which they kept in a puddle in the middle of the floor.

LM: There was an informal network of women working in the lefty print trade — places like Calverts and Bread and Roses. That’s often how we were able to use the equipment at these lefty presses, through our contact with the women there. And later there were women-only print shops like See Red and Women in Print. We talked to each other and helped each other out, but to us at Onlywomen it was the less the printing that linked us and more that we were all radical feminists. That first meeting in Islington and the conference we organised later were very much about both feminist printing and publishing.